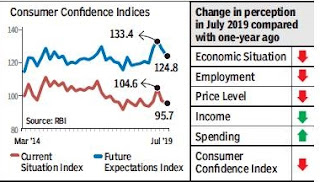 Consumer confidence has dropped further with respondents to an RBI survey indicating that not only was the sentiment negative for three of the five parameters in July but was expected to deteriorate further compared to two months ago. A year down the line, however, they expect the sentiment to improve a bit.

Consumers’ perceptions on the general economic situation and the employment scenario softened, while their assessment of their own incomes turned out to be less optimistic than in May 2019.

RBI’s latest consumer confidence survey showed that respondents perceived a rise in prices. While this boosted sentiment on overall spending, they were less optimistic about discretionary spending, which may reflect in a demand slowdown for consumer durables and automobiles. Already, some of these sectors have been hit by lower consumer spend, partly due to difficulty in accessing loans from NBFCs.

A weak consumer sentiment is also reflecting in the business sentiment, with respondents being less upbeat about production order book and capacity utilisation during the second quarter of the financial year. The good news is that availability of finance and profit margin are expected to be healthier in the second quarter.