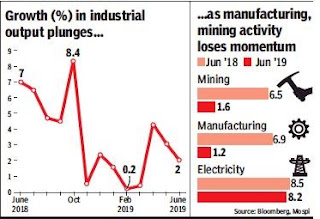 India’s industrial output growth slowed to a four-month low in June, dragged down by sluggish manufacturing and mining, and contraction in capital goods and consumer durables segments, triggering calls for policy reforms from the government to reverse the slowdown.

Industrial output growth rose an annual 2% in June compared to 3.1% in previous month and 7% in the same month a year earlier. The growth during the first three months of the fiscal year was 3.6%, slower than 5.1% recorded in the same period of the previous financial year.

The indication of sluggish industrial output growth numbers was evident in the core sector growth data, which showed it had slowed to a four-year low of 0.2% in June. The core sector accounts for 40.2% of the index of industrial production.

The IIP data showed the manufacturing sector, which accounts for the bulk of the data, slowed to 1.2% in June, compared with the 6.9% growth in June 2018-19. Signs of stress in the manufacturing sector have been evident for the past few months, with car sales slumping to new lows and companies shutting showrooms and staff as well as stopping production.

The capital goods sector, seen as a key gauge of industrial activity, contracted 6.5% in June, compared with 9.7% growth in the year-ago period. The sector has displayed sharp volatility, prompting economists to say that it is difficult to derive a trend and calling for better data collection for the segment.

Economists said the sluggish factory output numbers do not augur well for overall GDP growth. The RBI has cut interest rates four times in a row to boost growth and now expects the economy to grow by 6.9% in 2019-20.