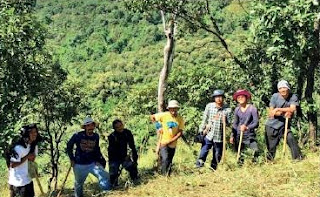 At a time when global warming and climate change are dictating geopolitics, 45-year-old Moirangthem Loiya from Manipur comes across as a leading light. For the last 18 years, Loiya, a resident of Uripok Khaidem Leikai in Imphal West, has been protecting nature and fighting deforestation. He is responsible for replanting a forest that he aptly named Punshilok, meaning ‘spring of life’.

As a child, Loiya often visited the lush green Koubru peak in the Maru Langol hill range, 35 km outside Imphal. But in 2000, he went back and couldn’t believe his eyes when he saw that the once green forest had been burnt down. There wasn’t a single tree and locals were cultivating rice there for a living.

Determined to bring greenery back, Loiya, sometime in 2002, started looking for land to plant trees. His search took him to Maru Langol hill range. Loiya soon left his job as a medical representative, packed some clothes and food and started living in Punshilok in a small hut he built himself. Moirangthem lived there for six years, toiling alone and planting bamboo, oak, ficus, magnolia, teak.

Initially Loiya purchased seeds of only three tree varieties. With the help of a few friends and volunteers, he cleared the weeds and started planting them. The vegetative growth was quick because of a natural spring in the area — one that has historically been revered by local residents.

How did the government react to Loiya’s efforts, since he was working on forest land that comes under state reserve? Nandeibam Mobi Singh, range forest officer, said, “Any sort of construction inside the forest reserve would be considered illegal encroachment. But because Loiya was acting as a helping hand in preservation, the initiative was not considered illegal.” Singh added, “Article 51-A(g) of the Indian Constitution clearly imposes a duty on every citizen to protect the environment, and to have compassion for living creatures.

Loiya and his organisation are adhering to this article by being responsible citizens of the country.” In 2003, Loiya and his friends established the Wildlife And Habitat Protection Society which, along with volunteers, looks after the natural wealth of Punshilok.

Today, the Punshilok forest covers around 300 acres. It is rich in flora and fauna, with varieties of trees, shrubs and medicinal plants getting a new home on hilltops. Around 250 species of plants and 25 species of bamboo grow there. The green cover is home to birds, snakes and wild animals like barking deer, pangolin, porcupine, mongoose, leopard cat, among others.

Locals too can feel the difference the forest has made in the past decade. “Temperature has gone down considerably and chirping of birds can be heard all year round,” said Kunjen, a native of Imphal. “The place has caught people’s attention, a large number of visitors including foreign nationals have visited the forest,” Loiya beamed.