MV bill gets closer to law 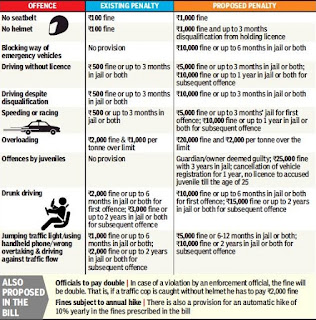 Parliament is set to pass the long-pending Motor Vehicle Amendments Bill, which brings a number of common offences—jumping traffic signal, use of hand-held devices (mobile phone) while driving, wrong passing or overtaking and driving against traffic flow—under the category of dangerous driving.

The fine for such offences has been increased five times from Rs.1,000 to up to Rs.5,000 with violators facing the risk of six months in jail.

The Union government may increase the fines mentioned under the Act every year by up to 10%, as per the bill. Guardians of under-age drivers will face fine and jail while the minor will not be eligible for a licence till the age of 25.

The measures taken by the Modi government are intended to reduce road deaths, which annually add up to around 1.5 lakh, after the Rajya Sabha put its stamp of approval on the legislation on Wednesday.

The bill primarily focusses on increasing penalty for traffic violations by five to 10 times in different cases, bringing in an automated mechanism for issuing driving licences and making auto manufacturers responsible for faulty products.

There are significant penalties for manufacturers failing to comply with vehicle standards that can go up to Rs.100 crore and a year in jail and similarly very hefty fines for road contractors.

The bill, however, will need to be go back to Lok Sabha for minor corrections after the government faced an embarrassing moment in Rajya Sabha as it introduced a slightly different version of the amendment bill from the one that was cleared by the lower House last week. Promptly latching onto the lapse, Congress alleged the Centre was trying to “hoodwink” Rajya Sabha by introducing “a defective bill”.

“It was a printing mistake. I apologise for it,” said transport minister Nitin Gadkari, after some hectic consultations. He later brought an amendment to rectify the error, which will now have to be approved by Lok Sabha before it gets presidential assent to become law. CPM and CPI demanded a division in the upper House, but it ultimately sailed through after an almost five-hour debate.

Rejecting charges that the bill will curtail powers of state governments and favour corporates, Gadkari said his aim was to reduce the high number of fatalities – 65% of them in the 15-34 year age-group -- by 50%, something which he candidly admitted he failed to achieve in the last five years. “The bill will pave the way for safer roads,” he said.

While some of the critics have raised concerns that such provisions may be misused by police and push up corruption on road in the absence of camera-based monitoring of violations, officials said such common offences contribute greatly to road accidents and fatalities. The bill defines dangerous driving as those which “causes a sense of alarm or distress to occupants, other road users and persons near roads”.

A senior ministry official said, “The law won’t come to force until the rules are framed and notified. The enforcement agencies should not create panic by cracking down on people while we appeal to people to follow the traffic norms for their own safety. We will give enough time for people to be aware of the new norms.” A provision has also been made to slap twice the penalty on law enforcing personnel, if they are caught violating traffic rules.