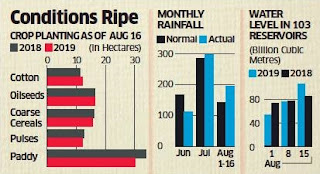 The rebound in monsoon rainfall has created ideal conditions for agriculture for the rest of the year with accelerated planting and much more water in reservoirs, which officials said would lead to record food production this year.

Rainfall in August has been 35% above normal so far, which has further improved crop planting and filled up major reservoirs with 25% more water than the 10-year average.

This completes the turnaround of the farm situation that looked grim in June when authorities were planning drought-relief measures as rainfall was one-third less than normal and reservoirs were depleting at a time they normally fill up to meet post-monsoon requirement of drinking, irrigation and power generation.

Now the conditions are ripe for a good harvest of the kharif, or summer-sown, crop and higher farm incomes, which in turn should boost festive season demand and to some extent revive sales of vehicles, gold and consumer goods in an economy where companies have been nervous about weak demand.

Data issued by the agriculture ministry shows that planting of oilseeds is almost the same as last year, cotton is 5.6% higher, while pulses and coarse grains are 3.5% lower. Rice planting is 11% lower, making total crop sowing 4% less than last year, which is a vast improvement over the 12.5% deficit in June.

The rains will not only help summer crops but also recharge the water table and fill reservoirs, which will help in the winter sowing also. Good monsoon rainfall, particularly towards the end of the season, are a boon for the winter-sown crops also as they improve soil moisture.

Officials said the improvement in oilseed planting, following heavy rains in Gujarat, Maharashtra and MP, was encouraging. It is now barely 0.7% lower than last year, but yields are expected to be better.