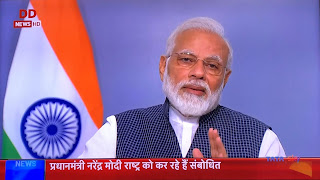 Addressing the nation at 8 pm on August 8, Prime Minister Narendra Modi addressed the momentous events of the previous few days with reference to Jammu & Kashmir, making several assurances to the now-erstwhile state and its people, amid strong plaudits and counter-opinions to the government’s move coming up across India.

Modi reached out to Kashmiris, assuring them that their new Union Territory status does not diminish them politically, adding that they will continue to elect their own Members of Legislative Assembly  and their Chief Minister.

Urging them to step up and reclaim their future, Modi said, “Please do come forward and shape your own destinies.”

Modi, who did not speak on the subject at all in Parliament, seemed to eschew triumphalism. In a televised radio address that went into details of why Article 370 was scrapped, the PM said, “In terms of political power, you will continue to get to choose your own MLA, get to elect your CM. Elections to the state assembly will be just as free and fair as it was for the panchayat elections.”

Asserting the advantages of being a UT, Modi said the historic decision to bring the state under Central administration was done to giving benefits to various sections of society. “As a matter of priority, government employees here, including police, will get the same benefits as those in other UTs, like leave travel concession, house rent allowance, education and health benefits,” he said, adding, “There was never any discussion as to how Article 370 was adversely affecting the people of Jammu, Kashmir, and Ladakh. And, it is surprising that no one was able to really tell how the article benefited the people.”

According to the PM’s speech, sanitation workers in different states of the country come under the Safai Karamchari Act, but workers from J&K were deprived of it. In many states, strong laws are there to stop atrocities against Dalits, but this was not the case in J&K, he insisted.

Modi dwelt briefly on the Bharatiya Janata Party’s favourite issue of West Pakistan refugees in Jammu. “You will be shocked — in J&K, for decades, there have been lakhs of people who had the right to vote in Lok Sabha polls, but could neither vote nor contest in Assembly/local polls. They are those who came to India after the Partition in 1947. Should injustice have continued with them?” he asked.

As for how he got the idea to convert the state into a UT, Modi said, “The decision to keep J&K directly under Central administration for a brief period was a well thought over decision. Since Governor’s rule was implemented in J&K, the state administration has been directly in touch with the Centre, due to which the effects of good governance can be seen on ground.”