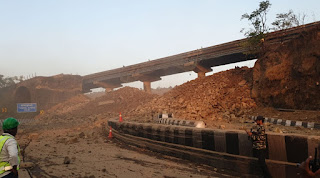 The British-era Amrutanjan bridge near Lonavala on the Mumbai-Pune expressway was demolished on Sunday through controlled blasting of explosives.

The Maharashtra State Road Development Corporation demolished the 190-year-old bridge to facilitate the movement of traffic on the expressway. The bridge, which was built by the British in 1830, was causing traffic snarls on the expressway and even led to several accidents. Although the use of the bridge was stopped long time back, its pillars were coming in the way of the vehicular movement on the route.

“The entire Mumbai-Pune expressway, which is around 100 km-long, has six lanes. But the wide pillars of the Amrutanjan bridge had made the nearby stretch a four-lane road,” a senior MSRDC official said.

“The pillars had occupied the space of an entire lane on both the sides, which used to slow down the traffic,” the official added.

“The bridge would have completed 190 years in November this year. But since it was causing a hindrance to the traffic on the expressway, it was decided that it should be removed. Accordingly, it was demolished using explosives,” he said.

The Raigad district collector had given permission to the MSRDC to carry out the demolition work between April 4 and 14. “The bridge was demolished around 5 pm on Sunday. In order to carry out the task, the traffic, which is already sparse due to the lockdown, was diverted to old Mumbai-Pune highway,” he added.

“The traffic will remain diverted for the next few days due to the debris lying on the route after demolition. The lockdown has given us enough time to remove the debris. It would need around 1,000 trucks to clear the rubble. We plan to complete the task before April 15,” the official said.

Giving information about the bridge, the MSRDC official said, “It did not have a specific name, but for a long time an advertisement of Amrutanjan pain relief balm was placed there. So it came to be known as Amrutanjan bridge.”

“It was a 110-metre long and 16-metre wide bridge constructed in earth work and basalt stones. It had five pillars and every pillar was almost three metres wide,” the official said. He said the cornerstone of the bridge will be preserved.