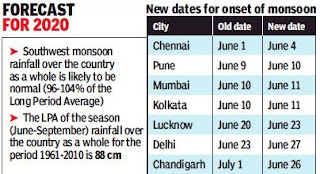 In what will spell a measure of relief for the economy reeling under the impact of the Covid-19 pandemic, the India Meteorological Department has predicted a ‘normal’ summer monsoon for the country during the June-September period and also released new reference dates for its onset or arrival and withdrawal in various cities.

The new dates indicate whether the monsoon would be longer or shorter by a few days or even a week in cities and states but the bigger and more reassuring message was that rainfall is likely to be 100% of the long period average, with a plus-minus error of 5%. This spells encouraging news for the rural economy as a good monsoon and kharif harvest will help sustain rural demand and stable incomes can keep rural distress at bay.

“Quantitatively, the monsoon seasonal (June to September) rainfall is likely to be 100% of the Long Period Average with a model error of ± 5%,” said Madhavan Rajeevan, secretary, ministry of earth sciences. Releasing the southwest monsoon forecast, he said there was quite a high probability of 2020 being a year of good rainfall (normal to excess). More than any other year, with estimates pointing to 1.6-2.8% growth for FY 2020-21, a poor monsoon would have been a triple whammy for the Modi government that is dealing with a health emergency and sharply declining economic activity.

“However, over extreme northwest India, the monsoon arrives little earlier, on July 8 compared to the existing date of July 15,” said Rajeevan. While monsoon in Jalandhar will be longer by 26 days (maximum variation), it will be shorter by 15 days in Agra.

“Monsoon withdrawal from northwest India will now be almost 7-14 days later from the existing dates,” said Rajeevan. Comparison of arrival and withdrawal dates of Delhi shows withdrawal will be three days late (September 25 instead of September 22) This would mean monsoon in the capital would technically be a day shorter.