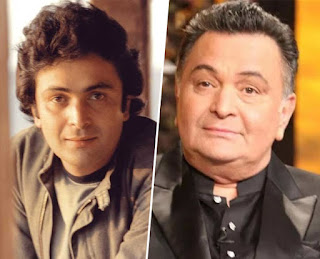 Hindi film veteran Rishi Kapoor, 67, died at a Mumbai hospital on Thursday after he complained yesterday of not feeling well.

The news was shared by actor Amitabh Bachchan on Twitter. 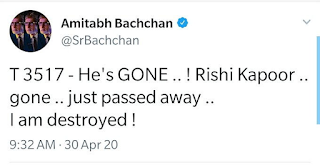 According to reports, the actor was admitted to Sir HN Reliance Foundation Hospital in Mumbai.

In 2018, Rishi Kapoor was diagnosed with cancer for the first time, following which the actor was in New York for nearly a year to undergo treatment. He returned to India in September 2019 after recovering.

Post his return to India, Kapoor's health had frequently been in focus. Amid speculations about his health, he had been hospitalised in New Delhi in early February, while on a visit to New Delhi.

The son of famous filmmaker Raj Kapoor, Rishi was born in 1952 and made his debut as a lead actor in 1973 with Bobby, directed by his father.

Rishi Kapoor had returned to India in September after undergoing treatment for cancer in the US for almost a year.

He was previously taken to the hospital in February earlier this year after being diagnosed with an infection.

Rishi Kapoor was awarded with a National Award for his portrayal of the childhood of his father Raj Kapoor in Mera Naam Joker that released in 1970.

Following Mera Naam Joker, Rishi Kapoor amused one and all in one of the biggest Bollywood hits of the 70s, Bobby (1973) opposite Dimple Kapadia.

His journey continued even until 2019. In the past decade, his character roles were appreciated by all ages especially in films like Do Dooni Chaar, D-Day, 102 Not Out and Kapoor and Sons.