WPI Eases to 1% in March 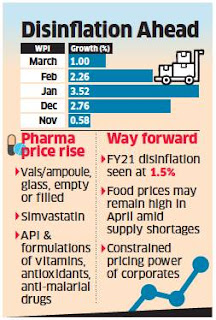 Wholesale inflation in India eased to a four-month low in March as prices of food and non-food articles fell.

Inflation, as measured by the wholesale price index, was 1% in March, down from 2.26% in the preceding month, while food inflation fell to 4.91% from 7.79% in February.

Inflation in vegetables was 11.9% in March compared with 29.97% in the previous month, while that in onion stayed high at 112.31% but was lower than 162.3% in February. However, pulses, potatoes and milk saw a rise in inflation last month.

The fuel and power basket saw deflation of 1.76%, while manufactured products saw inflation of 0.34%.

In FY20, WPI inflation moderated to a four-year low of 1% after witnessing sustained pickup since FY16, as manufacturers lost their pricing power due to sluggish demand. Inflation in manufacturing was lowest in the last four years at 0.3%, from 2.2% in FY19.