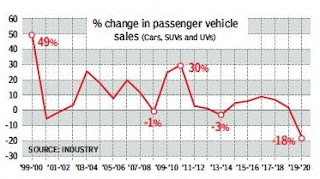 Sales of cars and two-wheelers crashed by record levels in fiscal 2019-20, going down the most in over 20 years. And, the forecast looks more bleak due to the dampening effect from the coronavirus lockdown. The grim situation may prompt companies to offer discounts and freebies to lure buyers in coming months, despite severe pressure on profitability.

The numbers in March, which have borne the initial brunt after fears around the virus started building up, have fallen sharply, with decline for passenger vehicles seen at 50% and two-wheelers at around 40%. According to numbers sourced from industry players, sales of passenger vehicles — cars, SUVs and UVs — fell by 18% in 2019-20, steepest since the year 1998-1999. The two-wheeler market is expected to see a decline of 16-17% for the full financial year.

Company executives feel that the going may be tough in coming time since disposable incomes could be under pressure as corporates start counting their losses due to the pandemic. Also, fear of job losses, slowdown and salary cuts may further dissuade buyers from engaging in new vehicle purchases, seen as the second-biggest spend after property.