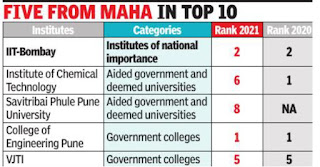 IIT-Bombay ranked second in the country among Institutes of National ImportanceTechnical in the Atal Rankings of Institutions on Innovation Achievements, afterIITMadras. The 2021 rank list was declared by the ministry of education on Wednesday. Among deemed universities ,Institute of Chemical Technology and Savitribai Phule Pune University from the state figured in the top 10 ranks. College of Engineering Pune and VJTI, too, made it to the top five colleges in the country for innovation achievements.

IIT-Bombay secured second position for the third consecutive year in the rankings. Director of the institute , Prof Subhasis Chaudhuri, said, “IIT-Bombay puts a lot of emphasis in creating an ambience that is conducive to innovation and entrepreneurship efforts of our researchers. ” He added that they are happy with the recognition, but there is scope for further improving the ecosystem.

Prof Milind Atrey, Dean (research and development), said that the institute is committed to promote innovation and entrepreneurship efforts of researchers. He added that the institute is working on research in semiconductors, energy, electric batteries, hydrogen, and digital analytics in healthcare, and is looking at possible funding options in these areas. Atrey said that the industry needs to increasingly work with innovators for successful outcomes. Among the major contributions from the institute this year was an indigenous CAR-T cell technology for affordable cancer cure. The researchers used a combination of gene therapy and cell therapy to modify immune cells to attack and kill cancer cells.

ICT’s Dean (research and innovation), prof Padma Devarajan, said that the institute set up their incubation centre this January, and are currently mentoring two incubatees and one preincubatee. “On the administrative front, too, we have introduced an innovation and startup policy to create an opportunity for students and faculty members,” she said, adding that the institute recently bagged a funding of Rs 50 lakh to setup the tinkerers’ lab. ICT retained its position in top 10 ranks among the aided government and deemed universities, but slipped from rank one to sixth. SPPU made it to the top 10 for the first time in the same category.