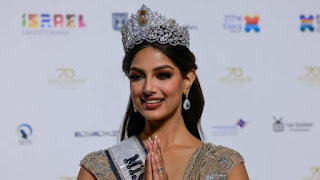 It took a 21-year-old from Punjab to place India at the top of the beauty universe after 21 years in 2021. Harnaaz Kaur Sandhu was crowned the 70th Miss Universe in the Israeli Red Sea resort town of Eilat on Sunday night and she topped it with a rousing celebratory yell in her native Punjabi: “Chak De Phatte, India!”

A model, actor, “closet singer”, writer of Punjabi couplets, Harnaaz—whose Instagram bio says “Shine like the whole Universe is yours” —is the third Indian to win the title after actors Sushmita Sen in 1994 and Lara Dutta in 2000. “Welcome to the club!!!... You make us SO SO proud!!! A billion dreams come true!!!” tweeted Lara, while Sushmita wrote: “Har Hindustani Ki Naz Harnaaz Kaur Sandhu.”

“We did it India,” said Urvashi Rautela, actor and Miss Universe India 2015, who was in the selection committee of the 2021 pageant.

PM Modi led the nation in congratulating the winner. He tweeted: “Congratulations to Harnaaz Sandhu on being crowned Miss Universe. Best wishes to her for her future endeavours.”

Harnaaz answered the final question about what advice she would give young women on how to deal with the pressure they face today. “The biggest pressure the youth of today is facing is to believe in themselves, to know that you are unique and that’s what makes you beautiful. Stop comparing yourselves with others and let’s talk about more important things that’s happening worldwide.” That was the biggest diamond in the diadem, before 2020 Miss Universe Andrea Meza of Mexico crowned Harnaaz her successor.

A nation watched in anticipation as Harnaaz sashayed onto the stage in an all-pink lehenga holding a bejewelled umbrella for the national costumes round and wore a dazzling silver gown after making her way to the top five. And as she was declared winner moments later, celebrations broke out at her home in Punjab’s Kharar near Chandigarh, with parents Pritam Singh Sandhu and Dr Ravinder Kaur Sandhu, a gynaecologist, sharing their happiness with neighbours. They are looking forward to welcoming their daughter with her favourite “makke di roti”.

She is doing her master’s degree in public administration. At Post Graduate Government College of Girls, Chandigarh, girls danced and cheered on Monday as a fellow student made them proud.