In Varanasi, PM goes for midnight inspection of development work 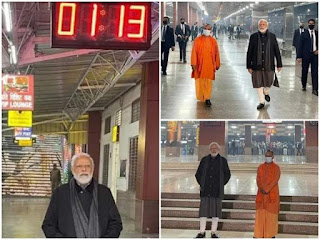 PM Narendra Modi went on a walkabout past Monday midnight in his parliamentary constituency and took a look at the development work done over the past seven years that has made Kashi, one of the world’s oldest continuously inhabited cities, a cleaner and more beautiful pilgrimage and tourist destination.

This was after he inaugurated the Kashi Vishwanath Dham project at a grand ceremony during the day.

“Inspecting key development works in Kashi. It is our endeavour to create the best possible infrastructure for this sacred city,” he tweeted at 12.52am about his stroll with CM Yogi Adityanath. Before that, he had two rounds of meetings with 12 CMs and six deputy CMs from BJP-ruled states on a cruise following Ganga Aarti.

The PM’s nightly walk began on the Godowlia-Dashaswamedh road that has been turned into a walkway for pilgrims and tourists.

From Godowlia, Modi reached Kashi Vishwanath Dham and inspected the work done there. His next stop was the renovated Banaras station around 1am. Modi and Yogi inspected the new modern facilities introduced for passengers at the station.