Delhi May Get Its 13th City Forest In January 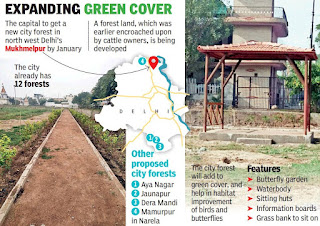 The capital is expected to get a new city forest in northwest Delhi’s Mukhmelpur by January. A forest land that was occupied by cattle owners for the past few decades is being restored and developed into a green zone.

According to a forest official, the encroachments were removed in August last year and the waste was cleared to develop the area into a city forest. “The forest has been created by reclaiming the land from encroachers. For years, waste was being dumped here. A majority of the work is now complete and it is expected to be thrown open to the public in January 2022,” an official said.

Spread over 3.86 acres, the city forest will include a butterfly garden, a waterbody, sitting huts, information boards to identify trees and medicinal herbs and a grass bank for people to sit. Though native trees, including peepal, jamun, neem and jacranda, are mostly present here, the city forest will have shrubs and smaller plants too.

Explaining the importance of a city forest, Vipul Pandey, deputy conservator of forests (north division), said: “The forest acts as a green lung for the city and helps create awareness about the green cover. It also serves as an habitat improvement for birds and butterflies. The waterbody, which has been developed inside the city forest, will help in groundwater recharge.”

Delhi already has 12 city forests while four others were announced at Marmurpur in Narela, Ayanagar, Jaunapur and Deramandi. “The work on developing the four city forests is under way. Apart from natural forests, such initiatives in urban areas are important for the ecosystem’s restoration. It helps in the revival of flaura and fauna,” another official added.