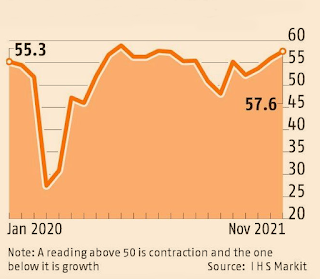 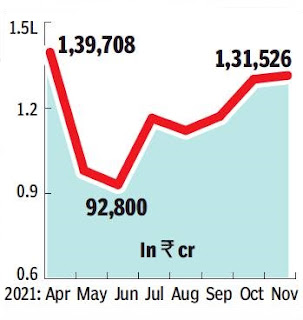 GST
Manufacturing activity in India grew at its fastest pace in 10 months, while GST collections touched ₹1.31 lakh crore in November, pointing to continuing economic recovery in the third quarter of FY22. The GST figure was the second-highest monthly collection ever.

The IHS Markit India manufacturing purchasing managers’ index rose to 57.6 in November from 55.9 in October. A PMI reading above 50 indicates expansion.

Other data corroborated the theme of recovery momentum. Merchandise exports rose for the 12th straight month in November, registering 26.49% growth. “This is very much in line with the trend in economic recovery,” the finance ministry said in a statement.

Companies scaled up input buying, which in turn led to the second-quickest accumulation in stocks of purchases in 17 years.

“The manufacturing PMI stayed above 50 for the fifth straight month, signalling firmness in the economic recovery,” said Barclays India chief economist Rahul Bajoria. “However, the survey was conducted before the emergence of the Omicron variant, which may impact sentiment going forward.”

India’s economy grew 8.4% in the July-September quarter from a year ago, going past pre-pandemic levels on strong consumer demand although the emergence of a new Covid-19 variant cast a shadow on the recovery.

“The stellar PMI manufacturing reading for November gives us confidence that the economy is on the mend and the momentum seen in Q2 is likely to continue in the third quarter,” said HDFC Bank economist Sakshi Gupta. “The reading in November is likely to have been supported by festive season demand, continued export growth as well as some easing of acute supply shortages in the month of October, especially for items like coal.”

However, Gupta cautioned that input cost pressures and supply disruptions could continue to be a drag and the Omicron variant could hit domestic and global demand, depending on its effects.

As per the IHS Markit Survey report, underlying data suggested that the domestic market was the main source of sales growth, as new export orders rose at a pace weaker than in October. Buoyed by the pick-up in demand, companies stepped up production volumes in November, and output rose sharply and at the fastest rate in nine months. Data for the survey was collected November12-24.

“The fact that firms purchased additional inputs at a stronger rate amid efforts to restock, combined with recurring declines in inventories of finished goods and tentative signs of a pick-up in hiring activity, indicate that production volumes will likely expand further in the near-term,” said Pollyanna De Lima, economics associate director at IHS Markit. November data pointed to an improvement in hiring activity among goods producers, IHS Markit said.