The 3km-long underground ‘Metro loop corridor’, which will connect the upcoming Central Secretariat buildings as part of the Central Vista redevelopment project, is likely to have two-coach trains. The coaches are expected to be smaller than the ones in conventional metro trains meant for mass transit, sources said.

Delhi Metro Rail Corporation will provide technical assistance for constructing the loop corridor and connecting it with the existing Central Secretariat Metro station at the concourse level. The underground project will be completely secured and access-controlled as it is primarily meant for the movement of thousands of government employees in the area. 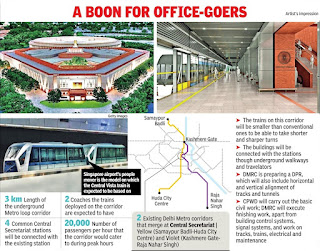 Sources said as there will be a shuttle service connecting the area with the metro network, initially not more than two coaches will be required. Although the technology to be used is yet to be finalised, they added that the system is likely to be similar to the people mover at Singapore’s Changi Airport.

Central Public Works Department and DMRC signed an MoU on February 28, according to which the latter will provide technical assistance and execute finishing and services works for the construction of the loop corridor.

The corridor will connect four Central Secretariat buildings with Central Secretariat station. The station is one of the major interchange hubs of the metro network, where the Yellow Line (Samaypur Badli-Huda City Centre) connects with the Violet Line (Kashmere Gate-Raja Nahar Singh, Ballabhgarh).

The corridor has been proposed to cater to office-goers who travel to the government offices using the metro. The planning is being done anticipating a peak hour demand of 20,000 passengers per hour during the morning and evening peak hours. Sources said the frequency of services will be the highest for those hours as the footfall during off-peak hours is expected to be low.

As per the MoU, DMRC will prepare the detailed project report for the corridor, apart from finalising the horizontal and vertical alignment of the tracks and tunnels, along with sizing of facilities like platforms, support services and maintenance facilities. DMRC had said it will also appoint the detailed design consultant for the project.

Sources said that the metro loop corridor will be constructed in sync with the Central Vista redevelopment project. The Central Secretariat metro station, which has been in operation for more than 15 years, is likely to see a revamp too.

The Central Vista redevelopment project has been envisaged by integrating the concept of transit oriented development, officials said. The connectivity of the loop corridor with NCR, thanks to the Central Secretariat metro station, is expected to significantly reduce the need to use private vehicles to reach offices in the area.

Apart from the Delhi Metro network, office-goers will also be able to use bus services available at the ground level, above the Central Secretariat metro station.