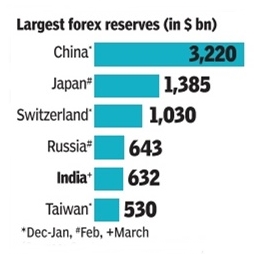 India’s foreign exchange reserves rose by $394 million to $631.9 billion in the week ended March 4, according to data released by the RBI. India currently has the fifth largest holdings of international reserves in the world, RBI deputy governor Michael Patra said on Friday.

The increase in the reserves position comes at a time when the rupee is facing volatility on account of the war in Europe. In the previous week ended February 25, the reserves had declined by $1.4 billion to $631.5 billion. It touched a lifetime high of $642.4 billion in the week ended September 3, 2021. Only China, Japan, Switzerland and Russia have a higher level of reserves compared to India. Data on Russian reserves have not been updated since the ongoing conflict. India had last year overtaken Russia to rank fourth. A large chunk of Russian reserves have been frozen by US.

“India’s international assets cover three-fourths of the country’s external liabilities, including debt, equity and all other forms of contractual obligations. In addition, there are second lines of defence in the form of forward assets and swap lines,” said Patra. He was speaking at an event organised by the Indian Merchants’ Chamber.

According to Patra, the greatest strength of India’s external sector is the buffer provided by the holdings of forex reserves. “The level has risen from 16% of GDP at end-March 2013 to the current 20. 5%. The import cover provided by the reserves on a prospective basis has doubled,” said Patra.