This year’s surge in exports was aided partly by higher prices of oil and other commodities, which saw a sharp rebound as demand came back. Several products such as automobiles and rice also saw increased volumes despite prices not seeing a sharp rise.

Officials also said that there has been some shift in demand to India as buyers, particularly in Europe, sought to diversify their sourcing from China following the Covid outbreak two years ago.

The government was obviously cheering the export growth. “India set an ambitious target of $400 billion of goods exports & achieved this target for the first time ever. I congratulate our farmers, weavers, MSMEs, manufacturers, exporters for this success,” PM Narendra Modi tweeted on Wednesday morning. Last year, Modi had detailed consultations with businesses and Indian missions overseas, urging them to boost exports.

While the target for the next financial year is still being worked out, commerce and industry minister Piyush Goyal told a press conference that India is poised for significant growth in the coming years. “Despite the difficulties, it is a pure testimony to the sheer grit, determination and capability of our entrepreneurs, MSMEs, farmers, handicraft and dairy sectors,” he said.

The minister said that engineering exports had hit a record high of over $107 billion so far this year, while electronics exports jumped 41% to $15 billion and farm exports were around $40 billion for the first time. 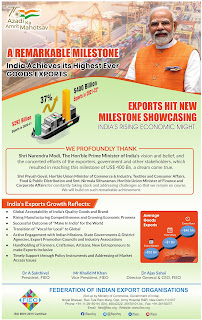