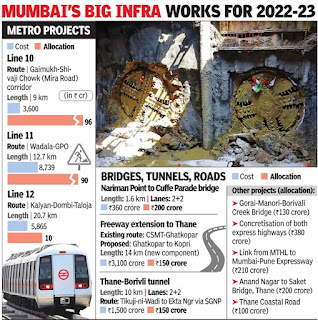 Crucial infrastructure works, including an underground Metro corridor between Wadala and CSMT, the extension of the Eastern Freeway till Thane, and the construction of a Coastal Road link between Nariman Point and Cuffe Parade are likely to begin this year. The Mumbai Metropolitan Region Development Authority has sanctioned substantial amounts for these projects in its Rs 18,404-crore budget for the 2022-23 financial year.

MMRDA undertakes works on the city’s Metro corridors and road expansion projects, besides developing crucial infrastructure in the Mumbai Metropolitan Region, which includes the districts of Mumbai, Thane and Raigad. The current budget was approved at the 152nd authority meeting chaired by urban development minster Eknath Shinde.

Metropolitan Commissioner SVR Srinivas said, “We have presented a budget with a deficit of Rs 7,680 crore. The expenditure proposed is Rs 18,404 crore as against revenue estimated at Rs 10,724 crore. ”

The shortfall will be met by borrowing through loans, revenue by leasing of land parcels, development charges, and income from Metro projects to be commissioned this year. Srinivas said, “This budget mainly emphasizes implementation of public transport and vital infrastructural projects, for which Rs 2,111 crore has been earmarked. ” (See graphic for projects. ) He said, “We hope to complete the tender process for the three Metro corridors in six months. Metro 11 will have integration with Metro 4 (Thane-Ghatkopar-Wadala). ”

The Detailed Project Report for the extension of Eastern Freeway till Thane is being prepared. MMRDA estimates that it will be able to finalise the DPRs and bids by August 2022. The DPR for the construction of a sea-bridge between Cuffe Parade and Nariman Point has been prepared and soon MMRDA will float tenders for which Rs 260 crore has been sanctioned in the budget.