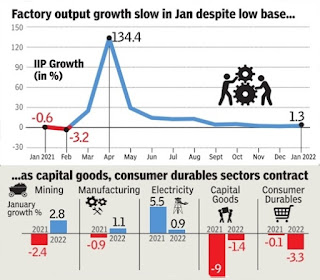 The country’s industrial output growth improved marginally in January but remained muted due to sluggish manufacturing & electricity sectors and contraction in the crucial capital goods and consumer durables segments.

The index of industrial production rose an annual 1. 3% in January, from an upwardly revised 0.7% in December. The sector had contracted by 0.6% in January 2020-21.

Output growth in the April to January period of the current fiscal year was at 13.7% compared with a contraction of 12% in the same year-earlier period.

“Two things can be concluded. First the pent-up demand seen in the festival months has dried up and Omicron cannot be the factor as manufacturing was not touched by the restrictions. Second, investment is still down as companies are working with surplus capacity and do not find the need to invest in capital. However, the fall in auto production can be directed more due to supply constraints than demand,” said Madan Sabnavis chief economist at Bank of Baroda.