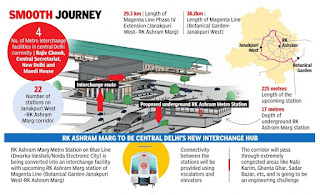 The rather quiet RK Ashram Marg metro station is all set to join the distinguished company of busy stations like Rajiv Chowk, Central Secretariat, New Delhi and Mandi House by becoming the fifth interchange station in the central Delhi metro network.

A spokesperson of Delhi Metro Rail Corporation disclosed that the existing metro station on the Blue Line (DwarkaVaishali/Noida Electronic City) was being converted into an interchange facility connected with the proposed underground RK Ashram Marg station of the extended Magenta Line (Janakpuri West- RK Ashram Marg).

The 29.3-km Janakpuri West-RK Ashram Marg corridor is an extension of the 38.2-km Magenta Line (Botanical Garden-Janakpuri West) and will have a total 22 stations. In December 2019, DMRC kicked off the construction work of its Phase IV project from this corridor.

“The new underground station will be constructed adjacent to the existing elevated station at a depth of 17 metres and will be 225 metres in length. An interconnection passage will connect the two stations,” the spokesperson said. “This will be a paid connectivity area equipped with elevators and escalators. ”

The spokesperson added that the contract has been awarded and the preparatory work has commenced. The construction of the underground metro station will have its fair share of engineering challenges. “From the perspective of civil engineering, this corridor will be among the toughest as it will pass be- low extremely congested areas such as Nabi Karim, Ghanta Ghar and Sadar Bazaar,” the official said. “However, DMRC will rely on its experience of carrying out underground work in old Delhi. ”

With RK Ashram Marg becoming central Delhi’s fifth interchange facility, both existing and new metro commuters will have access to a number of shorter alternative routes from central to north Delhi. “The interchange will provide a convenient mode of transit through Paharganj, Nabi Karim, Sadar Bazar, Ghanta Ghar, Pulbangash and several adjoining areas,” the official said.

Apart from RK Ashram Marg, the second and fourth stations on the corridor will also be interchange stations. After RK Ashram, the next station on the section is Nabi Karim, which will have interchange connectivity with the proposed Indraprastha-Inderlok corridor of Delhi Metro’s Phase IV extension. The next station after this is Sadar Bazar followed by Pulbangash, which again will be an interchange stat linking the corridor with the existing Red Line (Rithala-Shaheed Sthal New Bus Adda).

“This new connectivity will help residents of central Delhi reach Sadar Bazaar, Kamla Nagar Market and Ghanta Ghar, which, at present, do not have any metro connectivity. These areas will get direct connectivity to west and south Delhi areas besides Botanical Garden in Noida,” the spokesperson said. “This project will help in reducing traffic jams on busy roads such as Chitragupta Road, Sadar Thana Road and GT Karnal Road and other vehicular arteries. ”