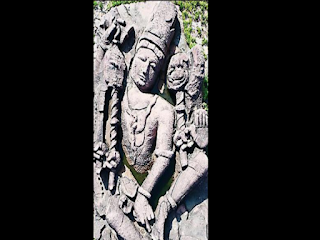 A monolith rock sculpture in Madhya Pradesh’s Vidisha district has turned out to be one of the biggest statues of Lord Shiva, around 1,500 years old, which was mysteriously left on the ground instead of being put upright.

Shiva statues come in many forms, and this is believed to be the world’s biggest Nataraja sculpture. A day before Mahashivratri, state convener of Intach Madan Mohan Upadhyay said on Monday, “It is the largest Nataraja sculpture in the world. The ruins have great potential of turning into a national and international tourist destination. ”

Intach has completed documentation of the ancient site — 140 km from Bhopal — and will submit a report, said Upadhyay.

The massive sculpture, 9m-long and 4m-wide, was created out of a single rock. It’s so big that its image could never be captured in one frame until Intach used a drone, which revealed for the first time that it is a dancing Shiva, he said.

For the past year or so, Intach has been working at the site of Udaipur, a city created by Parmar king Udayayditya, around 1059 AD. The Nataraja sculpture predates these ruins.

The village and associated infrastructure of palaces, temples, water bodies, bastions, fortification wall and the gates to the city and innumerable monuments speak volumes about Udaipur, Upadhyay said.

The place is known all over Madhya Pradesh for the Neelkantheshwar Mahadev temple, an ASI protected monument that attracts a large number of tourists, especially on Maha Shivratri. The story of the creation of this place along with the Neelkantheshwar temple of Lord Shiva is written in the inscriptions, which are now preserved in the Gwalior museum.