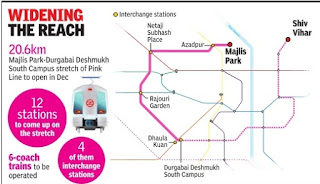 This December, Delhi Metro is going to open its first section of the Pink Line (Majlis Park-Shiv Vihar), a 20.6 km-long corridor, which will function like an arc connecting north, northwest, west and south Delhi. The remaining stretch of 58.5 km will be commissioned by March next year.

While the existing Metro corridors have been designed as radials spread across Delhi NCR, the Pink Line has been conceptualised as a large ring that will connect all these corridors. The Majlis Park to Durgabai Deshmukh South Campus section is one part of the ring, which will begin from north Delhi and on its way down to south Delhi, connect areas in northwest and west Delhi.

The number of interchange stations in the Metro network will go up to 27 once the Phase-III project is completed and both the Pink Line and Magenta Line (Janakpuri West-Botanical Garden) become operational. Starting from Majlis Park, there will be an interchange at Azadpur, which will connect with the Yellow Line (Samaypur Badli-HUDA City Centre).The next interchange station at Netaji Subhash Place will connect the Red Line (Rithala-Dilshad Garden) and the Rajouri Garden stop will link the Blue Line (Dwarka Sector 21-Noida City Centre Vaishali). The last interchange will be between Durgabai Deshmukh South Campus and Dhaula Kuan station of the Airport Express Line. The two stations are located 1 km away, which will be connected with a walkway that will have walkators.

Currently , the Airport Express Line sees a daily ridership of 50,000 commuters, which DMRC believes will go up substantially after the Pink Line opens.