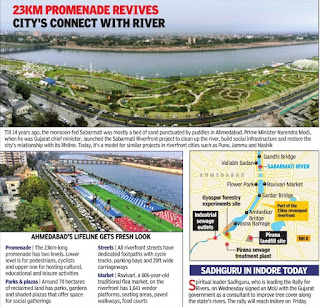 Not far from the densely packed industrial belt in Ahmedabad's Pirana Piplaj areas where 1,500 factories and warehouses jostle for space, a 29-acre green zone, packed with 47,000 trees, now brings a whiff of fresh air to the Sabarmati, named the third most polluted river in the country by the Central Pollution Control Board four years ago.

The Gyaspur forestry experiment of the Ahmedabad Municipal Corporation, 2 km from 50-metre-high smouldering garbage mounds in Pirana landfill, is partially responsible for the transformation. The experiment was undertaken to mask the stench from Pirana's four garbage mounds that have 78 lakh tonnes of waste accumulated over 30 years and smoulder throughout the year. The green zone was also AMC's attempt to compensate for the trees cut to pave the way for development in the city and complement the state's efforts to develop the environs of the river in the city.

The thick plantation has started attracting birds, animals and insects driven away by rapid industrialization and pollution. It's now home to 110 species of birds, including migratory varieties. Further, hundreds of species of insects, around 40 peacocks, 30 nilgais, 10 hedgehogs, jackals, a few mongoose and 15 species of snakes can also be found here.

AMC parks and gardens director Jignesh Patel said that in 2005, they had started it with around 100 trees to offset loss of trees cut in the city . “I had no idea that this place will turn into a rich bio-park,“ Patel says.

Naturalist Haseeb Sheikh, who rescues wild animals, prefers to release them here. “Gyaspur is an example of how trees and plants beside a polluted river become ecosystem engineers... You allow trees and plants to colonize a bare river sediment patch and they will do everything--from trapping of sediments to retention of seeds,“ he says.

In the past seven years, the locals have put up water pots at 13 places on this patch. “The river water is toxic with sewage and chemicals and we didn't want the animals and birds here to drink it,“ says one of the locals helping in upkeep of the 'forest'. As a result, Gyaspur has also become the go-to place for researchers.

However, some say more needs to be done. The AMC should plant more fruit trees.

The city civic body too agrees that Gyaspur is a work in progress. AMC's Jignesh Patel said: “We have started growing fruit trees like jamun and desi mango to encourage more nesting.“