Of IIP and inflation.... 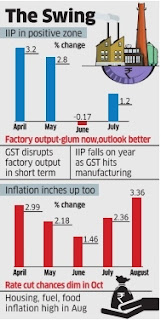 India's factory output expanded by a modest 1.2% in July, 2017, after contracting 0.17% in June, possibly on the back of some restocking by companies following the July 1 GST rollout and a marginal uptick in the core sector. However, it remained subdued compared with 4.5% clocked in the year-ago period.

Retail inflation in August rose to a five-month high on the back of food inflation turning positive after three months of contraction.

Data showed a mild expansion in the country's industrial activity, as measured by the Index of Industrial Production even as manufacturing continued to remain weak.

A separate set of data released by the office revealed a rise in consumer inflation in August at 3.36% compared with 2.36% in July.

Manufacturing output rose a meagre 0.1% while mining and electricity grew 4.8% and 6.5%, respectively.

Economists expect manufacturing GDP to rise in the July-September quarter as restocking of inventory picks up momentum. Manufacturing growth in the first quarter of the current financial year plummeted to 1.2% and was the main cause of a slump in India's GDP growth to a three-year low of 5.7%.

Reflecting sluggish urban demand, consumer durables output fell 1.3% compared with 0.2% rise in the year ago period. Capital goods production, an indicator of investment, fell 1%, a steep fall from the 8.8% growth in July 2016.

Retail inflation in August is the highest since March 2017 and is attributed to an across-the-board rise in inflation in food, housing and fuel. Vegetable inflation, at 6.16%, turned positive after 11 consecutive months of deflation in August 2017. Housing inflation rose 5.58% and that in pan, tobacco and intoxicants was up 6.85%.

However, economists are not perceiving inflation as a threat and expect it to remain in the targeted 4% range. Despite dismal first-quarter GDP growth and continuous weak IIP growth numbers, economists expect RBI to keep its October 2017 monetary policy unchanged.