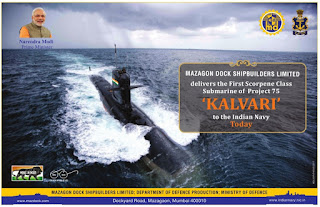 India will soon commission its first new conventional submarine in over 17 years, with the first Scorpene submarine INS Kalvari being delivered to the Navy at Mazagon Docks. The second one INS Khanderi is slated for delivery by December.

The delivery of INS Kalvari (tiger shark), the first of the six French diesel-electric Scorpene submarines being built under the Rs.23,652 crore “Project-75“ at Mazagon Docks in Mumbai, is significant because the Navy currently has just 13 ageing diesel-electric submarines, with just half of them operational at any given time.The force needs at least 18 conventional submarines.

India also has two nuclear-powered submarines, INS Arihant and INS Chakra, but the latter does not have nuclear-tipped ballistic missiles because it has been acquired on lease from Russia. The Navy needs at least six nuclear-powered attack subs and four nuclear powered subs with nuclear tipped missiles. The Scorpene project has, of course, faced huge time and cost overruns. INS Kalvari, for instance, was to be ready by 2012, with the other five coming by 2017. Now, with the third submarine INS Karanj to be “launched“ later this year, all the six will be inducted by 2020 or so.

Moreover, even the tender for the long-delayed Project-75-India for the six new stealth submarines, with both land-attack missile capabilities and air-independent propulsion for greater underwater endurance, is yet to be even floated.

Earlier this year, India finally kick-started this “mother of all underwater deals“ after an excruciating 10-year delay, with arms majors from France, Germany , Russia, Sweden, Spain and Japan being asked to submit initial proposals for the estimated Rs.70,000 crore ($10.9 billion) project to build the six submarines in collaboration with an Indian shipyard here. When P-75I was accorded “acceptance of necessity“ in November 2007, its estimated cost was around Rs.50,000 crore then. Once the domestic shipyard and its foreign collaborator for this project are selected under the “strategic partnership“ policy, it will take another seven to eight years after that for the first submarine to roll out.