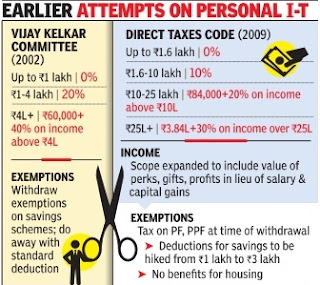 After indirect taxes, the government has now set its sights on overhauling the 56-year-old direct taxes law covering income and corporation tax as it seeks to make the Indian regime more contemporary and tailor it to current requirements.

Senior government officials said  that the finance ministry was in the process of setting up a task force to write the new tax law, an attempt which was last made in 2009 when Pranab Mukherjee released the Direct Taxes Code prepared by P Chidambaram and his team, only to significantly dilute it a few years later. The Bill was never legislated and the Narendra Modi government had dropped plans to rewrite the Income Tax Act as it got down to removing the clutter in indirect tax through the GST.

But with the Prime Minister himself commenting on the outdated nature of the law during last week's Rajaswa Gyan Sangam, the annual retreat of tax officers, the finance ministry has now started a review. Sources said the plan is to have the draft legislation ready by the Budget before it is put out for public comments. With general elections due in 2019, the government is unlikely to move to the new regime at the start of 2019-20 financial year, but may want to complete the ground work.

While it is still early days, DTC had originally proposed to do away with several tax exemptions, including those available on provident fund and public provident fund at the time of withdrawal. Proposing an exemption of up to Rs.3 lakh, it had suggested that the peak rate of 30% tax apply to those with income above Rs.25 lakh, while those earning Rs.10-25 lakh were to face 20% levy. The idea was to simplify the regime and increase the threshold for taxation. For companies, too, several exemptions were to be withdrawn.

While tax experts are in favour of a new law, the question is timing.