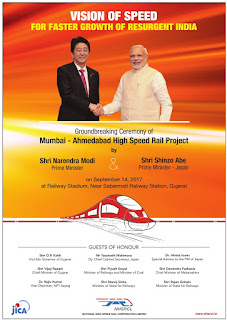 Abe's evocative reference to how merging Japan's `Ja' and India's `I' will give `JAI' at the launch of the bullet train project heralded the warmth in ties, and while the Japanese leader said he would do all he could for India, Modi responded by saying Japan was a true friend who offered loans at virtually no interest.

“The difference a half percent can make in interest rates is evident, particularly to people in Ahmedabad...Here is a friend who says `Pay back the loan over 50 years',“ said Modi, acknowledging Abe's commitment to initiatives such as Make in India. Modi's fourth annual summit with Abe saw a strong commitment to ensuring unhindered commerce and trade through the India-Pacific region with the convergence of India's interests with Japan's Free and Open Indo-Pacific strategy offering an alternative vision to China's much-discussed OBOR .

With many seeing OBOR as an instrument to further China's geopolitical objectives, the two PMs delivered a clear message to Beijing as they called on India and Japan to play a central role in safeguarding a rule-based order in the India-Pacific through maritime security cooperation, more defence exchanges and by improving connectivity .

Despite the focus on strengthening defence cooperation, the two countries couldn't finalise an agreement for purchase of US 2i surveillance aircraft by India from Japan. Foreign secretary S Jaishankar said discussions were still on. Also India and Japan decided to drop a specific mention of South China Sea from the joint statement despite reaffirming their commitment to freedom of navigation and overflight in the India-Pacific. Jaishankar said the principle was being acknowledged in the reference to India-Pacific rather than “specific geographies“.

This is significant as India and China weeks ago successfully resolved the Doklam stand-off. Jaishankar said the joint statement dealt with a full set of issues in the Indo-Pacific and under that all “sub-sets“ were covered.

However, the fact is that both 2016 and 2015 Modi-Abe joint statements had a specific reference to South China Sea while underlining the significance of freedom of navigation.

Asked if Doklam was discussed in the talks, Japanese officials said all issues of strategic interests came up in the dialogue. When asked the same question, Jaishankar said while it wasn't specifically discussed, there was a discussion on regional and global developments in a broader sense. He did make a pointed reference that the North Korea crisis highlighted the need to remember “backward linkages“ to its missile and nuclear programme -a pointer to China as much as Pakistan. India and Japan signed also signed 15 agreements after the talks, one of which was to create an Act East Forum to enhance connectivity and promote developmental projects in India's northeast in an “efficient and effective manner“.

In a not so subtle dig at China, Modi and Abe underlined the importance of all countries ensuring the development and use of connectivity infrastructure “in an open, transparent and non-exclusive manner based on international standards and responsible debt financing practices, while ensuring respect for sovereignty and territorial integrity , rule of law, and the environment“. India has accused China of undermining its sovereignty through the China-Pakistan Economic Corridor, a showpiece OBOR project.

There was no formal launch of an Asia-Africa growth corridor, but Modi and Abe welcomed efforts to explore development of industrial corridors and networks which, the joint statement said, will benefit various stakeholders in the India-Pacific region including Africa. As expected, Abe in his meeting with Modi called for “combining'' Asia, a continent that is rapidly growing, with Africa which has huge growth potential. 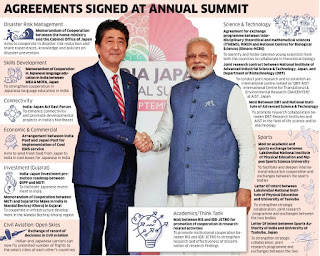