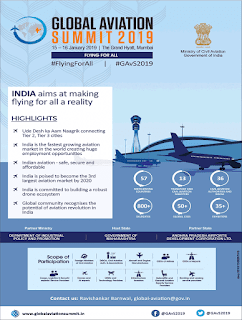 India’s air passenger traffic is expected to grow sixfold to 1.1 billion per year by 2040, according to the Vision 2040 report for the civil aviation industry released at the government-backed Global Aviation Summit 2019.

The Indian commercial air fleet is expected to be 2,359 by March 2040, says the report prepared by consultancy firm KPMG and industry body Federation of Indian Chambers of Commerce and Industry. India is also expected to have 190-200 operational airports by 2040, with Delhi and Mumbai having three airports each, it says.

India may consider investments of up to $2 billion for low traffic airports, excluding land acquisition costs, the report says. It also recommends that a strong leasing industry for financing of aircraft and maintenance, repair and overhaul, be established in India to prevent domestic airlines from going abroad for the facilities.

The Vision 2040 report was prepared in consultation with the government though it was not commissioned by it, said aviation secretary R.N. Choubey. The government will deliberate on the suggestions and take a call on which ones to implement, Choubey said.

Aviation minister Suresh Prabhu said the report will address the immediate challenges of the aviation sector. “We are working on getting aircraft financing and maintenance, repair and overhaul industry in India, which will Total passengers to, from and within India (in million).Domestic Total International also increase jobs in the country,” Prabhu said. At present, most airlines go abroad for MRO services and for raising capital to finance aircraft purchases.

Domestic airlines such as IndiGo and GoAir have had several flights grounded over the last few months because of glitches in the Pratt and Whitney engine.

The Centre also proposed amendments to the draft drone policy, including allowing drones beyond visual line of sight. The amendment also proposes the use of algorithm to pilot drones, and a dedicated drone corridor, besides creating drone ports for landing and taking off. It also bats for 100% foreign direct investment in drone manufacturing.

Meanwhile, Qatar Airway’s group chief executive officer Akbar Al Bakr said on the sidelines of the event that the airline is in talks with IndiGo and GoAir for code share opportunities.

International Air Transport Association expects India to become the third-largest aviation market worldwide in the next decade, it said in a report released at the summit.

The aviation industry in India is not yet on a sound financial footing and this remains a work-in-progress for the industry and its key stakeholders, including policymakers, it said.