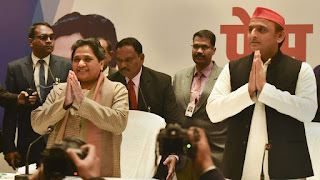 Samajwadi Party and Bahujan Samaj Party announced their tie-up in Uttar Pradesh for the 2019 Lok Sabha polls, sharing 38 seats each and keeping the Congress out of the alliance.

The parties, however, said they would not field candidates in Amethi and Rae Bareli, represented by Congress president Rahul Gandhi and UPA chairperson Sonia Gandhi respectively. They also left two seats out of the 80 in the state for smaller allies, without naming them. But there have been talks with the Rashtriya Lok Dal.

Making the announcement with SP president Akhilesh Yadav, BSP chief Mayawati mocked Prime Minister Narendra Modi and BJP president Amit Shah. “This press conference will rob the guru-chela of their sleep,” she said. “I have full confidence that just as our alliance defeated the BJP in the Lok Sabha by-polls, we will crush the saffron party in the general elections.”

Explaining why the Congress was not included in the alliance, Mayawati said during its rule, poverty, unemployment and corruption grew and there were scams in defence deals. “Just like the Bofors scam uprooted the Congress, the BJP will witness the same fate because of its involvement in the Rafale scam,” she said, referring to the graft allegations against the ruling party in a deal for French military aircraft.

She also said her party had not benefitted in tie-ups with the Congress. “In the past I have seen that our votes get transferred to the Congress, but not vice versa. We do not gain from an alliance with the Congress, whereas the vote transfer is perfect in an SP-BSP tie-up,” Mayawati said.

To a question on seat-sharing with the RLD, Akhilesh Yadav said the media would be informed about it in due course. Asked if he would support Mayawati as prime minister if the situation arises, Yadav said: “You know whom I will support. I have said in the past that UP has always given a PM, and I will be happy if it gives a PM again.”