Per Capita Real Income To Rise By 6% After 2 Years 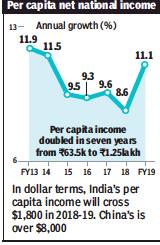 Per capita net national income in the country is set to expand at the fastest pace in five years in 2018-19, according to the first advance estimate of GDP unveiled by the government. The data showed that per capita net national income is estimated to grow by 11.1% to Rs.1,25,397 in 2018-19 at current prices, faster than the 8.6% growth rate notched up in the previous year. At 2011-12 prices, it is expected to be at Rs.91,921, displaying a growth of 6.1% compared to the previous year.

Economists attributed the increase to a string of factors, including low inflation, expectations of a pickup in overall growth as well as an increase in remittances. But they said the divergence in per capita among states was an issue that deserves attention. They also cautioned that since the estimates are provisional, it could also be revised downwards. In fiscal year 2013-14, the growth rate in net national income was 11.5% and in high growth years such as 2010-11 and 2011-12, the growth rate was 13.8% and 18.2% respectively. Economists also cautioned about drawing any concrete conclusions from the data.

Some other economists said that sustained efforts are needed to catch up with the rest of the world in terms of per capita income, which is a measure of prosperity.