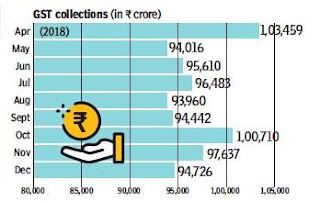 Gross GST revenue receipts slowed to Rs.94,726 crore in December, lower than the previous month’s Rs.97,637 crore. But experts said there was no cause for concern as the overall trend points to a stabilisation in the tax regime.

Receipts had crossed the Rs.1-lakh-crore mark in October, triggering hopes that they would settle at the same level in the months ahead, easing some of the worries over GST collections.

Slowing collections come against the backdrop of a tight fiscal situation. Data from the Controller General of Accounts showed that the Centre has breached its fiscal deficit for the current year at the end of November. But experts say that the gap will narrow as revenues flow in the last quarter and expenditure is rationalised.

Direct tax revenues have been robust. The government has vowed to meet the fiscal deficit target of 3.3% of GDP for the current fiscal year that ends in March, signalling its commitment to fiscal consolidation.

Tax experts said that there is traditionally a dip after the festive month in October. They said that the average receipts last year were about Rs.89,000 crore and this year so far, it is averaging Rs.95,000-96,000 crore despite rate cuts on a string of items.

Some experts said they expect receipts to go up on the back of the new compliance framework that is expected to be unveiled.