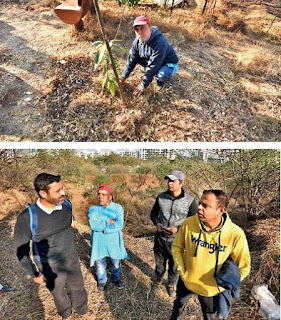 The Punekars’ penchant for reviving the hills around them took a more involved turn at Kondhwa’s Anandvan, where it was no longer about cleaning the place, plantation drives and watering the trees, but actually changing the existing vegetation. Yet for Praveen Kumar Anand, who stumbled upon the 64-acre hill, while on an evening walk with his wife, soon after arriving in the city from Dehradun in 2013, it was a mission he was not going to be dissuaded from, by such challenges.

The sexagenarian’s commitment to the project he’d taken on himself was tested by the hill in many ways. When he started working on the hill, he was confronted by its use as a dumping ground for both construction as well as household wastes from the neighbouring societies. “There were tonnes and tonnes of garbage being dumped on this forest land. They also included toxic medical waste. Many a time I would end up barfing while cleaning the place, but would soon return to the job at hand,” said the man, popularly called Kumar uncle. Eventually, he managed to rally a bunch of motivated locals to help him in the task.

Cleaning was one thing, improving the biodiversity of the place was another and a more challenging one at that. While there were a quite a few trees on the hill, they were not exactly attracting a respectable avian population. So next project was introducing new species of vegetation. Only the saplings planted would either wilt and die soon or just take longer than usual to grow.

Quizzed by this, he roped in ecologists to delve into the issue. Soon, he was enlightened that the primary vegetation on the hill was that of Gliricidia Sepium, an invasive plant species that drastically deplete the soil nutrients and does not allow other species to thrive. Gurudas Nulkar, an ecologist and member of Ecological Society, who studied the hill in 2016, told Mirror, “There were multiple concerns that needed to be addressed on the hill. For one, the soil quality was low. Worse, the top layer of the soil that supports plants with nutrients, was eroded. The absence of any organic ground cover or seasonal grass was another issue. The wide presence of Gliricidia gave the hill the look of a green desert, appearing barren despite there being many trees.”

Guided by Nulkar, Anand and his little army set about riding the hill of Gliricidia in sections. These were replaced with fruit-bearing trees. They also created paths for joggers using the hill, to spare the saplings from getting trampled. To counter the high ground temperature in the absence of any cover, twigs and grass were piled around the barks to cool down the roots. The group also sought the contribution of kitchen waste from neighbouring societies for composting in pits created and feeding the soil.

There is also a design to the plantation being undertaken on the hill. “Our aim here is not only to plant trees and improve green cover. With an eye on the ecology, we are also trying to develop food chains and improve the diversity of the place. Millet and fruit-bearing trees have been planted to also attract a variety of birds offering them space for nesting and roosting,” informed Bhupesh Sharma, who is part of the Anandvan Mitra Mandal, started by Anand.

The results have impressed Nulkar, who has clearly gotten involved hands on. “When I started visiting the hill there were hardly any birds in sight apart from the crows hovering overhead. In the past one year we’ve sighted over 50 species of birds flocking to the place, including falcons, kingfishers and grey hornbills. There is also a flock of six peacocks that have made the hill their habitat. We’ve put up feeders and waterholes in different sections of the hill. Now the main challenge is to attract some insectivorous birds,” he said.

Deeply involved, the group has already ploughed in Rs.10 lakh to revive the hill. But they need more help and welcome public support in the form of volunteering. They would appreciate if residents from the societies took on the responsibility of a tree each. This could help the flora and fauna on the hill to flourish, they are convinced.

For Anand, who started it all, this is not an exercise in aesthetics. “The hill may not be visually appealing to many but that is not on our agenda. It is time for the urbanites to acquaint themselves with the concept of wilderness. In all these years, we’ve been at it, only 35 people have joined us, of whom only 12 are regulars. True, reviving a hill is a Herculean task and the support from institutions and locals can go a long way in making a difference to our environment,” he said.