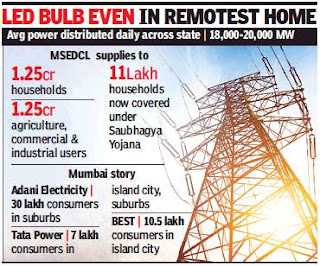 MSEDCL achieved the target on December 27, with four days to spare. Till then, 1.25 crore households were receiving power supply from MSEDCL. As many as 10,93,614 households were given connection during the weekend. Besides, MSEDCL also supplies electricity to 1.25 crore agriculture, industrial and commercial consumers.

MSEDCL chief spokesperson P S Patil said that while survey and census identified households without electricity, many families also complained about lack of power supply in their villages, and these cases were attended to.

Households from the economically weaker section were given free connections while others were charged Rs.500. Officials said the Rs.500 will be recovered in ten instalments in electricity bills of the consumers. Under the scheme, the highest number of connections (1.5 lakh) were provided in Pune district.

“Households were given the internal wiring along with a charging point and a free LED bulb. In remote areas, where it was difficult to supply power through the traditional method, electricity connections are given under the solar power project,” an official said. In such places, the beneficiaries were given free internal wiring along with1 DC fan, 5 LED bulbs and a DC charging point.

The MSEDCL had a major achievement in February when it provided electricity supply to Gharapuri island (Elephanta)— which received supply for the first time since independence. The power utility firm had laid 7.5 km long cables on the seabed for the electrification.