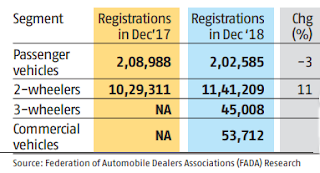 Car and SUV sales slipped into the negative terrain in the first nine months of this fiscal as weak consumer sentiment, cautious financing and high fuel prices saw buyers stay away from the market despite lucrative discounts and a slew of new launches.

Data released by automobile retailers shows that demand has been “unusually weak” this fiscal, especially as the festive season failed to light up fortunes and banks and NBFCs maintained a cautious approach in consumer and dealer financing on growing “risk factors”.

A survey by the association pegged the current inventory of passenger vehicles between 35 days and 40 days, while for two-wheelers at between 55 days and 60 days.

Companies have been saying that a “series of negatives” are pulling the demand down. Executives say, on condition of anonymity, that demand will continue to remain under pressure till the conclusion of the general elections this year.

Discounts have been deep this fiscal, but customers are refusing to take the bait. New models such as Hyundai’s Santro and Mahindra’s Marazzo have not been able to add much volumes to the industry’s numbers.

Even Tata Motors, which has been the fastest-growing PV maker (on the back of new models such as Nexon mini SUV), is complaining of weakness, especially towards the end of the year.

Companies have been trying to control the inventory at dealerships in line with the slowdown.