India likely to be larger economy than US by 2030 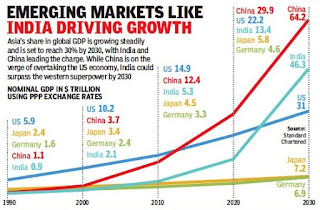 India will likely be a larger economy than the US by 2030, while China will top the list and Indonesia will figure among the top five, a research report has predicted.

Seven of the top 10 economies in the world by 2030 are likely to be from current emerging markets based on purchasing power parity exchange rates and nominal GDP, according to a research report of Standard Chartered.

Based on market exchange rates, the US, Germany and Japan will remain among the top five economies in 2030, although even by this metric, India is still likely to be larger than Japan by then, it said.

India will likely be the main mover, with its trend growth accelerating to 7.8% by 2020s, partly due to ongoing reforms, including introduction of GST and the Insolvency and Bankruptcy Code, the report said.

China’s growth is likely to remain strong in the next decade but moderate slowly to 5% by 2030, reflecting a natural slowdown, given the size of the economy. The government expects GDP growth in the current year at 7.2%, while most multilateral agencies see growth in India accelerating as China moderates.

According to StanChart’s long-term forecasts, emerging markets, especially Asia, are likely to increasingly drive global growth. The combined US, Japan and euro-area GDP share of world GDP (based on market exchange rates) fell to 46% in 2018 from 51% in 2010, and is expected to slide further to 40% by 2030.