The 5G spectrum auctions came to a close after seven days. It fetched a record Rs 1.5 lakh crore for the exchequer as the government now prepares to launch the high-speed telecom services from October this year across metros and top cities.

Mukesh Ambani’s Reliance Jio was the biggest purchaser, lapping up spectrum worth Rs 88,078 crore. Jio was followed by Sunil Mittal’s Airtel that bought spectrum worth Rs 43,084 crore, while Vodafone Idea spent Rs 18,799 crore. Gautam Adani’s Adani Data Networks was a silent spectator in the auctions as it spent Rs 212 crore for buying airwaves in Gujarat, Mumbai, Karnataka, Tamil Nadu, Rajasthan, and Andhra Pradesh. The company, a surprise entrant in the telecom business, had made it clear that it is buying spectrum mainly for enterprise purposes, and has no active plan to enter consumer mobility business.

Telecom minister Ashwini Vaishnaw said 5G services are expected to begin by October as the government now hurries up to complete spectrum allocation and other formalities to expedite the launch.

The current collections of the government far exceed the previous record of Rs 1.1 crore of 2015 auctions, indicating the confidence of the industry, which was caught in a financial mess and statutory dues, helped by AGR (adjusted gross revenue) relief. A mega package announced by the government in September, which was followed by further sweeteners for 5G auctions, saw the companies commit heavy investments. Around 71% of total 72,000MHz of spectrum put up for sale was sold, and the biggest achievement was sale in 700MHz band, which failed to find buyers in last two auctions. Jio bought the spectrum in the band. 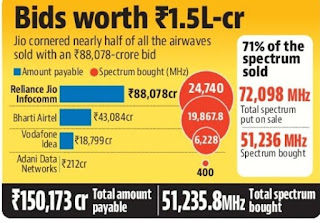