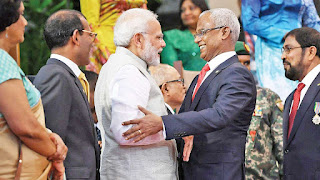 As PM Narendra Modi hosted Maldivian President Ibrahim Solih, the two countries reiterated their assurance to be mindful of each other’s security concerns and, according to a joint statement, to not allow their respective territories to be used for any activity inimical to the other. This is important in the context of efforts by China to increase its footprints in the region despite recent setbacks, most notably in the neighbouring Sri Lanka with the departure of the Rajapaksas.

Identifying trans-national crime, terrorism and drug trafficking in the Indian Ocean as serious threats, Modi called for close contact and coordination between India and Maldives in defence and security for “the peace and stability of the enti re region”. The PM announced that India will provide 24 vehicles, second Landing Craft Assault and another naval boat to the Maldives’ security forces and that it will also cooperate in building police facilities in 61 islands of the Maldives.

India and the Maldives also signed six agreements, with the former announcing another $100 million line of credit for financing projects in the archipelago, as Modi said India will continue to act as the first responder in any crisis faced by the country.

The two leaders also formally inaugurated work on the $500 million Greater Male connectivity project, which is being financed by India. The joint statement said the India-Maldives defence and security partnership is time tested and is the leading example of regional cooperation in the areas of transnational crimes and disaster relief. “This partnership is a force for stability in the Indian Ocean Region,” it said.