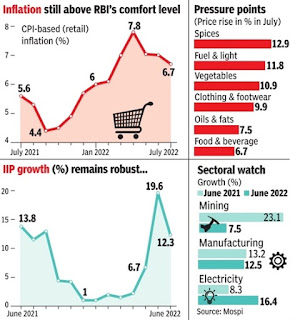 Retail inflation moderated to a five-month low in July on the back of easing of food prices, bringing relief for policymakers who are battling price pressures. But the overall number still remains above the RBI’s upper tolerance level for the seventh consecutive month.

Retail inflation, as measured by the consumer price index, rose an annual 6.7% in July, lower than the 7% in June. The food price index eased to 6.6% during the month from 7.6% in June as supplies improved and measures undertaken by the Centre and the RBI fed through the system.

Rural inflation was higher at 6.8%, while urban was at 6.5%. Among 23 states and Union Territories, 15 had inflation above 6%, while eight recorded below 6%. Soaring inflationary pressure had prompted the RBI to raise interest rates and in its recent review it hiked interest rates by 50 basis points (100bps = 1 percentage point).

The retail inflation data showed vegetable price rose an annual 10.9%, while fuel and light prices rose 11.8% due to increase in crude oil prices. Easing of global commodity prices due to fears of recession in the developed world may have a cooling effect on domestic prices. “Though July print is above RBI’s target for the seventh straight month, we firmly believe that the downward trajectory of inflation has started in India (and possibly in the US also). Core CPI (minus food and fuel) also moderated to 10-month low of 5.79% in July,” said Soumya Kanti Ghosh, group chief economic adviser at SBI.

Economists said they still expect the central bank to raise interest rates in the months ahead to bring inflation closer to its target range. “Given the MPC’s focus on anchoring inflation expectations and the governor’s statement on inflation moving closer to the target of 4% over the medium term, we expect another rate hike of about 10-35bps in the September 2022 policy meeting,” said Aditi Nayar, chief economist at ratings agency ICRA.

Separate data showed factory growth at a robust 12.3% in June, lower than the 19.6% in May. Manufacturing sector grew at 12.5% during the month compared to a growth of 13.2% in June 2021. “Manufacturing output showed healthy growth in June and supported overall IIP (Index of Industrial Production) activity. This reflects improving demand conditions and easing of supply-side challenges,” said D K Joshi, chief economist at ratings agency Crisil.