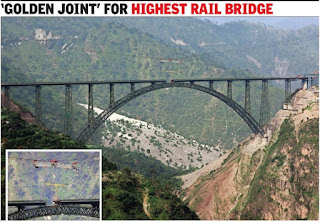 In yet another milestone in the construction of the world’s highest railway bridge, the overarch deck of the iconic bridge over Chenab will be completed with a ‘golden joint’ on Saturday. With this, the project to provide rail connectivity to the Kashmir valley will be 98% complete. The railway ministry had set the target to complete the rail link to the Valley by 2023. Northern Railway officials said the ‘golden joint’ is the last part of the bridge deck, which will make the deck one continuous segment. ‘Launching of the 785-metre deck over the arch bridge is in progress from both the ends, which will be joined together by the golden joint near the crown. This joint will be closed by means of high strength friction grip bolts,’ said one official. The Chenab Bridge is part of the rail link project in Reasi district of J&K. The bridge has a length of 1.31 km and is at a height of 359 metres from the river bed, making it the world’s highest railway bridge. At present, the highest rail bridge is located in Guizhou province of China and is 275 metres above the water level.

The Chenab Bridge is being constructed at a cost of Rs 28,000 crore. 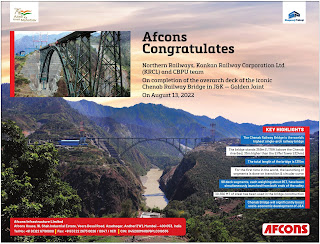