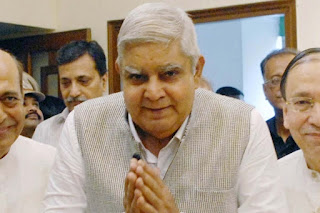 NDA nominee Jagdeep Dhankhar was elected the 14th Vice President of India, defeating joint opposition candidate Margaret Alva after securing 528 votes against his rival’s tally of 182. Though the outcome of the vice-presidential contest was a foregone conclusion, Dhankhar’s victory was rich in symbolism as it signalled the continued dominance of the Prime Minister Narendra Modi-led BJP, with all key constitutional posts—President, Vice President (who is also ex-officio Rajya Sabha Chairman) and Lok Sabha Speaker—held by the party.

It also dealt a body blow to the anti-BJP camp, which had pitched the VP polls as a battle of ideologies between “Constitution keepers and those who undermine it”, and whose claim to a grand opposition unity came apart in the run-up to the contest when Mamata Banerjee’s TMC broke ranks and decided to abstain from the vote. Dhankar, 71, swept the polls with 72.8% of the 725 valid votes cast, his wining margin of 346 votes being the highest in the last six vice-presidential polls since 1997.