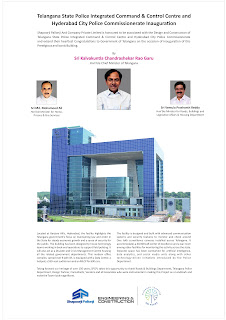 The costliest police command and control centre in the country was inaugurated by chief minister K Chandrasekhar Rao in Banjara Hills on Thursday.
Seven years in the making, the Telangana State Police Integrated Command & Control Centre has been built at a cost of Rs 600 crore. KCR had laid its foundation on November 22, 2015.
It would be under the direct command of Hyderabad commissioner CV Anand who officially assumed
charge at the ICCC’s 18th floor in tower A in the CM’s presence. Apart from his office at ICCC, Anand
as Hyderabad CP also has offices at Basheerbagh and Purani Haveli. Apart from the police commissioner, all officers of the rank of joint CP and additional CP from Hyderabad commissionerate will operate from the ICCC.
The CM, chief secretary and the DGP will also have offices in the building, though they will not be
working regularly from there. Nodal officers from R &B, GHMC, fire, TSSPDCL and some other departments will also have work stations at the ICCC for effective coordination with police. The CM credited it as the brainchild of DGP Mahendar Reddy. “This command control centre was DGP Mahendar Reddy’s idea. After Telangana formation, when I was discussing avenues for better policing with then chief secretary Rajiv Sharma, then DGP Anurag Sharma and Mahendar Reddy, who was then Hyderabad CP, he (Mahendar Reddy) spoke about creating this kind of facility that can be used for regular work as well as during disasters for effective coordination,” said CM.
While saying that the pandemic delayed the construction of the centre by two years, KCR also saluted the efforts of officers behind the elite anti-naxalite unit Greyhounds, Special Intelligence Branch and the Counter Intelligence Cell.