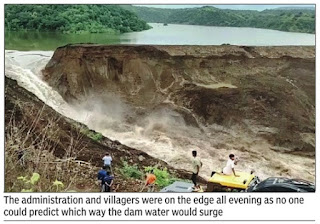 A portion of Karam dam in MP’s Dhar collapsed on Sunday evening as a channel dug to drain water from the reservoir widened under pressure of the surging water. Thankfully, there were no casualties as around 10,000 people from 18 downstream villages had been evacuated. Chief minister Shivraj Singh Chouhan issued a video statement to say that all is well and the danger has been averted. “You can return home in coordination with the administration and celebrate Azadi Ka Amrit Mahotsav in your villages,” he told the thousands living in relief camps.

Barely a couple of hours before this, the CM had tweeted a video urging villagers, with folded hands, not to return to the villages. The administration and villagers were on edge all evening as no one could predict which way the dam water would surge.

The administration sought to portray that everything that happened was part of the plan. Divisional commissioner Pawan Sharma said that water hadn’t even entered the evacuated villages whereas there are videos and eyewitness accounts of water entering villages and temples submerged.

“For a while we were shaken,” the CM acknowledged, adding: “Now, there is no danger. ” Around 10pm, the water reached the last affected village of Jalkota in Khargone district and started merging with the Narmada river after which the administration breathed a sigh of relief. The CM spoke with villagers of Jal Kota over phone.

Water resources minister Tulsiram Silawat has set up a five-member committee to probe the construction. A Delhi-based firm was building the Rs 304-crore dam. The breach in the dam was noticed on Thursday afternoon, sparking panic in nearby areas and alarm in the administration. After government engineers failed to plug the leak, the Army was called in and around 200 soldiers began working in the wee hours of Saturday to prevent collateral damage. On Saturday, Chouhan spoke with PM Narendra Modi and home minister Amit Shah and requested to have two IAF choppers on standby.

A channel was dug to release water into Namcha river and on to the Narmada.

It’s this channel that widened around 6pm on Sunday evening, sending torrents of water surging downstream.

Eyewitnesses said that floodwaters touched the brim of a four-lane bridge on Agra-Mumbai national highway barely 30 minutes later. For a while it seemed as if the bridge would be overwhelmed but the water stayed just below it.

Traffic was stopped on the highway across a 30km stretch and an alert sounded in riverside villages near the temple town of Maheshwar, 50km away, where the dam water flowed into the Narmada.

There was no report of loss of life till this report was filed. Ravi Solanki, an eyewitness of the submergence of Kothira, Imlipura and Dugni villages, said that all three hamlets and standing crops all around went under water. An alert was sounded in villages in Khargone and near Maheshwar.