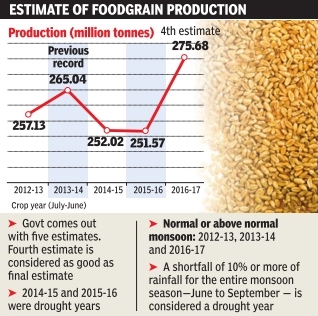 India's foodgrain production for the 2016-17 crop year is estimated at a record 275.7 million tons, a number which is expected to bring cheer to policymakers and bolster claim of efficient rollout of policies for the farm sector.

The government revised its previous figures upward by 2.3 million tons and the new figure is 4% higher than the previous record production achieved in 2013-14. The production in 2016-17 is significantly higher by 24.1 million tons (9.59%) than the output of 2015-16 which was a drought year.

India had recorded its previous best in the year 2013-14 when it produced 265.04 million tons of foodgrain, backed by good and well-distributed Monsoon rainfall. The ministry attributed the all-time record of foodgrain production in 2016-17 to good rainfall in 2016 and various policy initiatives taken by it. Record output has been achieved in all major crops of foodgrain basket like rice (110.15 MT), wheat (98.38 MT) and pulses (22.95 MT). The current crop year (2017-18) may , however, not be as good despite normal Monsoon in many parts of the country .