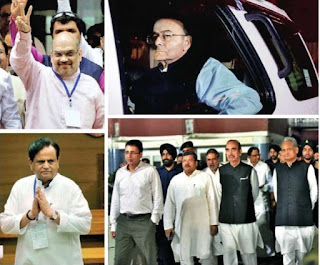 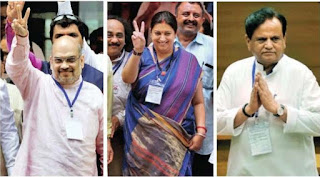 Ahmed Patel, Congress president Sonia Gandhi's political secretary, won a bitterly fought battle for a prestigious Rajya Sabha seat, defeating BJP in a high-stakes contest ahead of Gujarat polls scheduled later this year. The victory came after days of intense tussle between the two sides for each vote and on a day of dramatic developments which saw Election Commission rejecting the votes of two Congress MLAs who voted for BJP.

Although the Election Commission was yet to declare results, celebrations broke out in Ahmedabad once party managers declared that Patel had got 44 votes--just enough for him to save the battle from going into the second preference round where the saffron party would have had a clear advantage because of the sheer numbers it has in the electoral college.

Going by Congress's calculation, Patel could have pulled it off with the support of 43 party MLAs and Jayant Patel, one of the two NCP MLAs in the House.

Congress's claim of support from BJP rebel Nithinbhai Kathodia and lone JD(U) member Chhotubhai Vasava were disputed by BJP sources who did not rule out the possibility of NCP's Patel going along with Congress.

BJP's determination to snatch a seat which Congress, ordinarily speaking, was set to win and Congress's resolve to hold on to it turned it into perhaps the most suspenseful contest for a Rajya Sabha seat.

The relief for Congress marks a setback for BJP, particularly party chief Amit Shah who scripted the audacious run on Congress's vote bank, as well as the Congress rebel Shankersinh Vaghela who teamed up with the saffron party to put the contest on knife's edge. It was Vaghela's man Balwantsinh Rajput who was Patel's challenger.

Amit Shah and Union minister Smriti Irani scored easy victories.  A defeat for 'AP' as the Congress leader is known, would have been a morale shattering blow for the party ahead of assembly elections in Gujarat where BJP is widely seen as the front runner. It would have been a personal loss for Sonia Gandhi for whom Patel has been the most trusted aide.

In contrast, the narrow defeat should rankle BJP , considering that it raised the stakes high for itself in a battle which was for Congress to lose. It is the first setback for Shah who has been on a remarkable victory run, with a number of impressive wins in state polls under his belt. The rejection of two votes will train the spotlight on his “take-no-prisoners“ style, with Congress already accusing BJP of playing foul, using money and political power to subvert democracy .

Fortunes of the two parties fluctuated through the day . Congress had seemed confident till late afternoon, but optimism quickly gave way to pessimism because of fears of desertion and sabotage. The fear, however, turned out to be misplaced as Patel managed to secure 44 votes or just about enough to make it to Rajya Sabha for the fifth time on the strength of first preference votes.