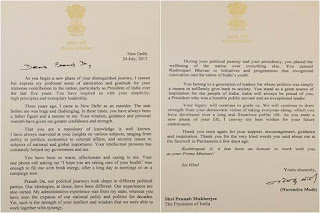 Pranab Mukherjee tweeted a heart-warming letter written by Prime Minister Narendra Modi on the last day of his term as President in which he called the former first citizen his “mentor“ and thanked him for being a “father figure“ after his arrival in Delhi three years ago.

The tweet, which was immediately retweeted by thousands of Mukherjee's followers, also got the PM to respond with an emotional tweet: “Pranab Da, I will always cherish working with you.“

The letter, which Mukherjee put up on Twitter, clearly showed the bond between the two leaders who come from different political ideologies. In the letter, the Prime Minister said he had come to New Delhi three years ago as an outsider. “The task before me was huge and challenging. In these times, you have always been a father figure and a mentor to me. Your wisdom, guidance and personal warmth have given me greater confidence and strength,“ wrote Modi. Terming it an example of the highest values in public life set by two men, BJP chief Amit Shah said Modi's letter to Mukherjee on his last day as President and his “affectionate“ reply were an ideal example in modern day politics. “When two figures occupying high constitutional posts give each other respect as mandated by the Constitution, then the prestige of both the posts is enhanced. Mukherjee and Modi have set an example for this,“ he said.

“This is also an ideal for the country's politics,“ Shah said, adding PM's letter and Pranab's reply spelt out the bond between the two leaders drawn from different political ideologies.