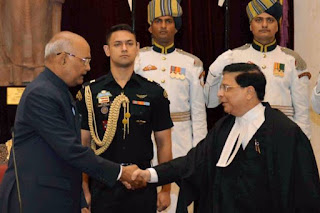 The Union government is in a piquant situation as its near five-month silence on the Supreme Court collegium's recommendation to appoint six advocates as judges of the Telangana and Andhra Pradesh high court has virtually stalled the selection process for appointment of judges to the SC and HCs.
By the end of this month, the SC will have six vacancies and HCs are reeling under near 40% vacancy, with 407 of 1,079 judges' posts vacant as of August 1.

Unless a solution is found quickly, new Chief Justice Dipak Misra will find the going tough as the most senior judge in the SC, Justice J Chelameswar, has taken a non-negotiable stand that unless the Centre takes a decision on the recommendation for six appointments to the Telangana and AP HC, he will not take part in collegium meetings.

There has been no collegium meeting since July 20, when former CJI J S Khehar had circulated an agenda for filling up four vacancies in the SC among members -Justices Misra, Chelameswar, Ranjan Gogoi and Madan B Lokur.

The six advocates recommended for appointment to the Telangana & AP HC are DVSS Somyajulu, K Vijaya Lakshmi, P Keshava Rao, Manthoj Ganga Rao, A K Shavili and T Amarnath Goud. The HC has a sanctioned strength of 61 judges, but 34 posts are vacant.