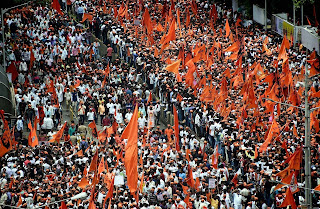 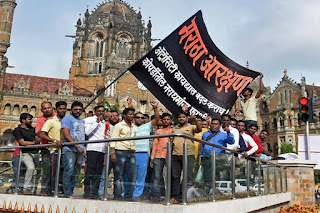 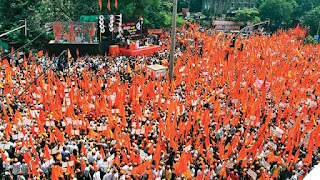 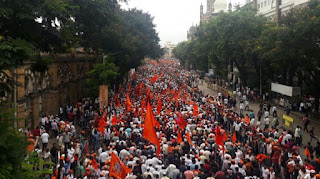 Holding aloft saffron flags, lakhs of Maratha community members filled the city's streets as they took their battle for reservation in government jobs and education to the Maharashtra capital, throwing traffic haywire and putting the overburdened suburban railway under severe strain.

The metropolis turned into a sea of saffron as members of the politically influential community from different parts of the state converged here to press for reservation in government jobs and education among other demands.The Marathas took out a silent march from Jijamata Udyan in Byculla to Azad Maidan in South Mumbai.

As the agitators assembled at Azad Maidan, Mumbai's protest hotpsot, a few kilometres away , in Vidhan Bhawan, CM Devendra Fadnavis announced his government would extend to the Maratha community the educational concessions currently given to OBCs. He also said the BJP-led government would form a cabinet sub committee to review the implementation of various welfare schemes meant for the Maratha community , but stopped short of announcing quotas for them in jobs.

The announcements were made after Fadnavis held a meeting with representatives of the Maratha community , whose demands have received support from almost the entire political spectrum in the state.

A delegation of 40 people, including women, met him at the Vidhan Bhawan this afternoon. The legislature is currently having its monsoon session. Earlier this morning, the Marathas took out their silent march from Jijamata Udyan amid tight security with participants wearing saffron caps and carrying saffron swallowtail flags. Police and traffic personnel were deployed in large numbers to manage the huge inflow of people and the movement of vehicles in Mumbai.