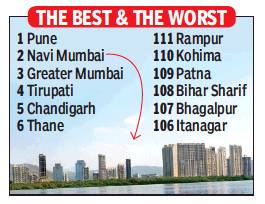 Cities in Maharashtra have taken the top three positions as well as the sixth rank in the first national survey of the most liveable cities. Pune, Navi Mumbai and Greater Mumbai featured on the podium, while Thane was at number six.

The Ease of Living Index of 111 cities, ranked Rampur in UP at the bottom, with Kohima in Nagaland and Patna in Bihar preceding it. Bengaluru, which has seen congestion become a serious drawback, ranks 58 and Hyderabad 27.

Although Pune did not bag the top rank in any of the 15 parameters the cities were judged on, it finished in the first 10 in nine categories.

Not everyone is convinced by the rankings. “If Mumbai is considered liveable despite all this (long commutes and high pollution), it is really frightening as it means quality of life is even worse in other cities,” said Subodh Kumar, a former Mumbai municipal commissioner.

The national Ease of Living exercise by the Union home and urban affairs ministry is aimed at helping cities assess their liveability vis-à-vis global and national benchmarks and encourage cities to move towards an outcome-based approach to urban planning and management.

Mumbai scored well on identity and culture (rank 2), public open spaces and mixed land use (1), assured water supply (3) and transportation and mobility (8). Surprisingly, the financial capital ranked 63 in economy and employment, 54 in reduced pollution, 23 in governance and 36 in education.

The rankings are based on the overall scores each city got on a 100-point scale across 15 categories and 78 indicators. The data was made up of what the cities furnished, a third-party survey and feedback from around 60,000 citizens

A BMC official privy to the whole process said they collated the data sought by the state government for the report in April. “There was a live questionnaire. While around 80% of the information sought on open spaces, water supply, road network, transportation facilities like bus stations, security cameras was available with the BMC, for additional details we had to approach authorities like the Mumbai Port Trust, MMRDA, police or Mhada,” he said.

In safety, Pune and Greater Mumbai were ranked at 25 and 35 among all the cities.

What worked in favour of Navi Mumbai was governance (rank 1), education (2), health(3), transportation and mobility(4) and assured water supply (7). It was let down by power supply
(74), reduced pollution (48), housing and inclusiveness (35). Municipal commissioner Ramaswami N said he is happy Navi Mumbai is marginally behind Pune. “We are just 0.09 overall points behind... Navi Mumbai has also been judged best for governance,” said Ramaswami.

“We have managed to bring Thane a long way from its identity of being a dormitory city or playing younger brother to Mumbai. It is a matter of immense pride for me that I could contribute to help the city secure an admirable place on the national map,” said municipal commissioner Sanjeev Jaiswal.